A Potential for Cooperation

There were those who suggested that Aman Ki Asha seminar on water issues should be postphoned, in the wake of the disappointing Foreign Ministers’ meeting in Islamabad barely two weeks earlier. But the organisers -- Aman Ki Asha in collaboration with the centre for Dialogue and Reconciliation, New Delhi, felt it was more important then ever before to continue the dialogue.

It was a good decision. Although the event was overshadowed by the air tragedy in Islamabad – for which participants observed a two- minute silence - it couldn’t have been more timely. Barely was the seminar over when floods in Pakistan under-scored the importance of the issues discussed: climate change, Watershed management, cooperation and joint monitoring.

Use water as a tool to build trust and cooperation, urged delegates at the seminar. The aim was to discuss the issues that have arisen recently between the two countries over the use of waters of the Indus river system.

Pakistani delegates underscored Pakistan’s water crisis and concerns as the lower riparian - concerns the delegates agreed were caused as much by lack of timely data, as by ongoing tensions between the two countries, they discussed the perception in Pakistan that India is diverting Pakistan’s share of water, which the Indian experts explained was not the case. However, there are reduced flows of water in the rivers, related to ecological changes in the region. 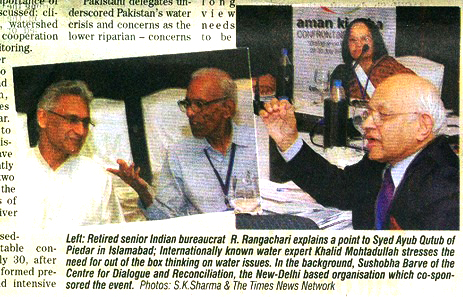 Delegates agreed that water - with its political, environmental and technical aspects – could be a tool for cooperation rather then divisions, and that a long view needs to be taken of this issue.

They underscored that the Indus Water Treaty of 1960, which divided the rivers of the Indus Basin between the two countries has been negative as well as positive for both countries. Even so, it remains a viable agreement that has stood the test of time and even war.

Participants agreed on the need to share up-to-date data and information in order to counter misperceptions. They also agreed on the need for both countries to better manage their water resources internally. In addition, a joint cooperative approach is necessary to counter the growing water crisis that threatens not only the lives and livelihoods of the people of the region but also relations between India and Pakistan.

The discussion took into account factors adding to water stress in the Indus basin, like climate change, glacier melt, fluctuation in precipitation patterns and increasing exploitation of water due to rising populations (increasing groundwater use, direct withdrawals from the river etc).

Delegates agreed that sharing experiences, particularly success stories, would be mutually beneficial. In addition, they agreed that a regional approach, and certain concrete steps are necessary to improve Pakistan India relations, improve trust, transparency and accountability and also ease water stress. These include:

THE TIME OF INDIA

Water Boiling Over Across LoC

Terrorism is the main discordant note in India-Pakistan ties and is at the heart of the trust deficit. But threatening to spill over is another issue – water. As part of Aman ki Asha and backed by Delhi-based Centre for Dialogue and Reconciliation, experts from the two countries met on Thursday and Friday,

Misperceptions and not facts dominate the debate on water across the border. Pakistan’s green belt draws ots sustenance from rivers that flow out of Jammu and Kashmir. Now, more than 60 years after these waters have been peacefully shared, there are mounting accusations that India could choke this supply line by building a series of dams.

Sittiing across the table for two days, top water management experts and irrigation engineers form the two countries discussed the issue, often with a degree of rancour, of only to understand each other’s positions as a starting point on a journey to cool the debate that some hawkish commertators have suggested could lead to war.

At the centre of the debare was naturally the 1960 Indus Water Treaty that governs the flows into Pakistan and Provides an agreed dispute-resolution mechanisum. In recent months, the buzz in Pakistan has been that India is building more than 100 dams on the Sutlej and Chenab and this will deplete supplies to farmlands that feed Pakistan’s 180 million people. While some Pakistani experts stuck to that position, most appeared convinced that India was not violating the IWT by building these dams and what was planned were a few dozen small projects, called run-of-the-river, which wouldn’t obstruct flows but only divert them for a short stretch to run power turbines.

The meeting coincides with a new row over the 330mw Kishanganga hydroelectric project in J&K. India and Pakistan, after failing to resolve it within the IWT, agreed to international aribitration with the UN secretary-general selecting an umpire.

“There is no drying up because run-of-the-river projects deplete water only at filling time of new dams. Whether there are 50 or 100 it doesn’t matter. You can’t store running water.” Said B G Verghese, a water expert associated with the centre for Policy Research.

Other like Ramaswamy Lyer, former water resources secretary, agreed with Verghese that while neither India nor Pakistan were models of water management, there was no data to show that New Delhi was cheathing on the Indus agreement. In fact, experts from both sides said there was no data available to shape a reasonable debate guided by facts.

To this end, the conference urged both countries to jointly plough for data and make it public so that the existing fog clear. Joint mechanisms to measure water flows intl Pakistan, as in the case of Bangladesh, coluld remove mistrust, they said.

The conference, like previous ones on strategic issues and the media, was structured around a series of closed-door sessions featuring presentations and open discussions.

Byond wate-sharing, discussions went into issues relating to environmental and ecological challenges in the Himalayan region, as well as cooperation in watershed management.